Text By: Germx | Photos By: ONE

The fanmeet kicked off with the cast’s very own rendition of the all-time favourite drama My Love From The Star’s “My Destiny“, creating a sense of familiarity right from the start. It was also an apt way to start the event, since the videos shown during the fanmeet were linked to this drama too.

Singapore was the last leg of this Race Start Season 2 Fan Meeting, and with quotes from Kim Jong Kook (and yes, he spoke this sentence in English), “I hope you all enjoy yourself tonight, okay?” and HAHA’s “Let’s have fun tonight!”, that evening was no doubt filled with wonderful and funny moments that left one wanting the cast back in Singapore again.

The highlight of the short Question and Answer segment was definitely when the cast touched on the topic of the Monday Couple. When asked on how Song Ji Hyo wins Kim Jong Kook, she mentioned that she was only able to rip off the nametag because of the help rendered by Gary. Kim Jong Kook added that “When the Monday Couple is together, they are really strong. It is really hard to beat them.”  An affectionate “Thank you, Gary Oppa~” by Song Ji Hyo instantaneously drove a round of cheers from the supporters of the Monday Couple. It was also heart-warming to note that the cast would make references to Yoo Jae Suk even though he was not in Singapore, displaying the close working relationship between them. 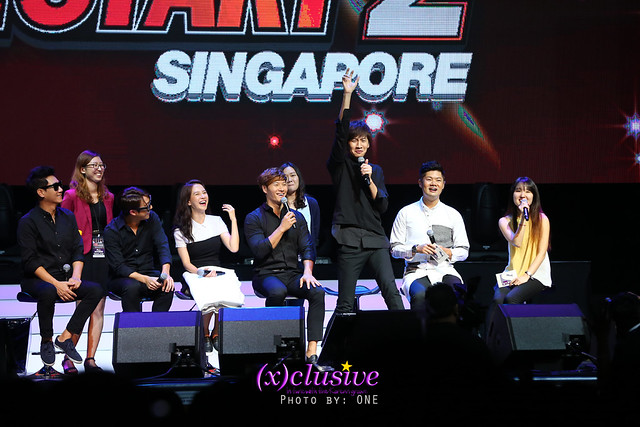 When asked on what Lee Kwang Soo thought about his nickname “Asia Prince”, he mentioned that he was really shy about it. However, as it was a term given by Kim Jong Kook, he feels happy.

Moving on to the game section, which was actually a giant Monopoly, the first game was titled “Five Kinds of Relay”, where ten lucky fans were picked. The individual missions each member needed to complete were as follows:

Kim Jong Kook – Picking beans with a chopstick, Song Ji Hyo – 50 sit ups, Ji Suk Jin – Ttakji (Traditional Korean game where you need to flip the pocket over by throwing another pocket on it), Lee Kwang Soo – Bursting a balloon and HAHA – Kicking a chapteh for 10 times. (A/N: Just wondering if we were the only ones bewildered as to why Ji Hyo was doing the sit ups while Jong Kook was picking beans?!) 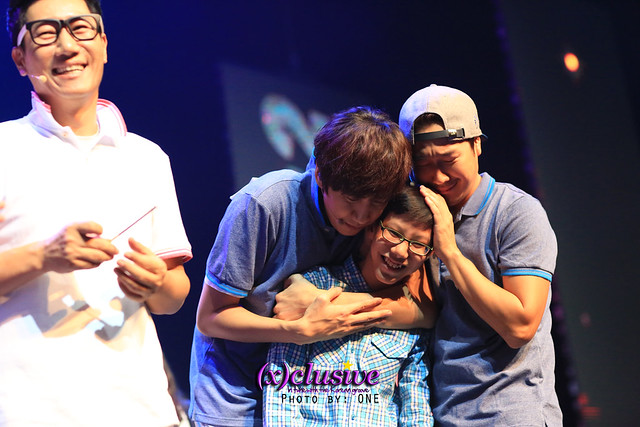 The second one was a punishment for Ji Suk Jin, where a ‘lucky’ fan was chosen to play the Pepero Game with him on stage. It was pretty hilarious how the other members were consoling the chosen fan and kept going, “Poor boy!” 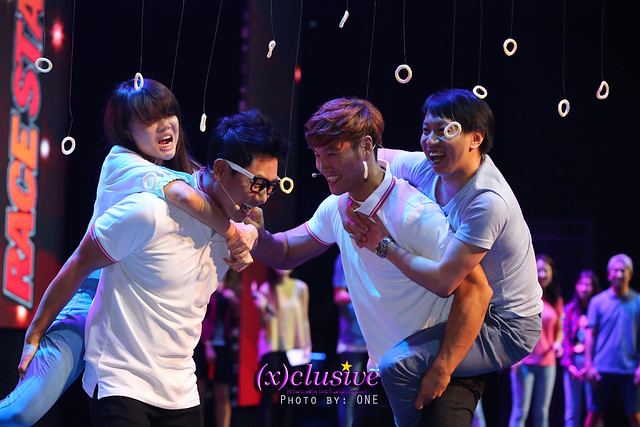 Next up, the third game required the Running Man cast members to piggy back the chosen fans and run to bite off the snack hanging from the horizontal pole. Despite being the only female, Song Ji Hyo proved that she was no doubt the ace when she won Kim Jong Kook in the final round.

Moving on, it was Speed Quiz by Gestures, where members of the team needed to pass the word down the line, through actions. The most note-worthy one was definitely when the word ‘Giraffe’ was flashed and Kwang Soo immediately started ‘galloping’ across the stage! 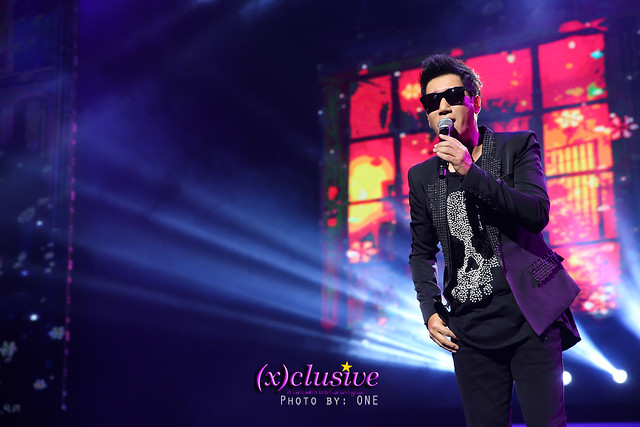 After the games segment, it was time for some solo performances. Ji Suk Jin wowed the crowd with a serenade of Billy Joel’s “I Love You Just The Way You Are“, while Kwang Soo amazed fans when he appeared with a piano and sang Kim Bum Soo’s “보고싶다“, and even walked down the stage halfway through the song to pass roses to lucky fans! The performances continued with Ji Hyo’s “Scent of a Flower” (from the drama, Emergency Couple) and LEESSANG’s “Turned Off the TV” (some Monday Couple love, anyone?). The cute part about this performance was when HAHA and Kim Jong Kook appeared with Gil and Gary’s paper masks respectively, inducing bouts of laughter from the audience present that night. 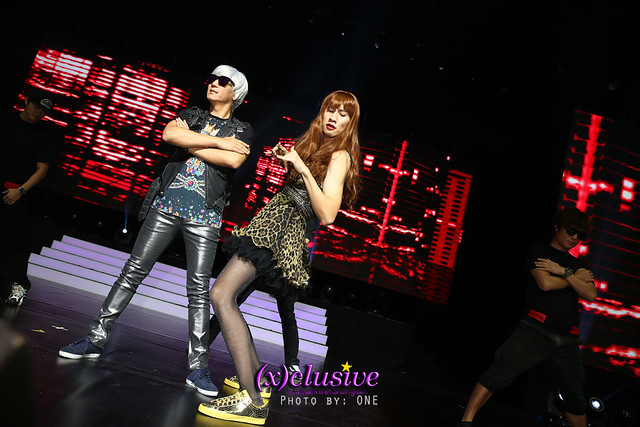 And yes, the highlight of the fanmeet was undeniably Lee Kwang Soo and Ji Suk Jin’s rendition of “Troublemaker“! Torn between laughter and amazement, it was indeed visually shocking yet all sorts of right when the dance moves were in place. It was definitely the crowd’s favourite that night! The sexy dance ended with the pair fighting and ‘clawing at each other’s faces’, which was quite unexpected after the intimate moves performed. 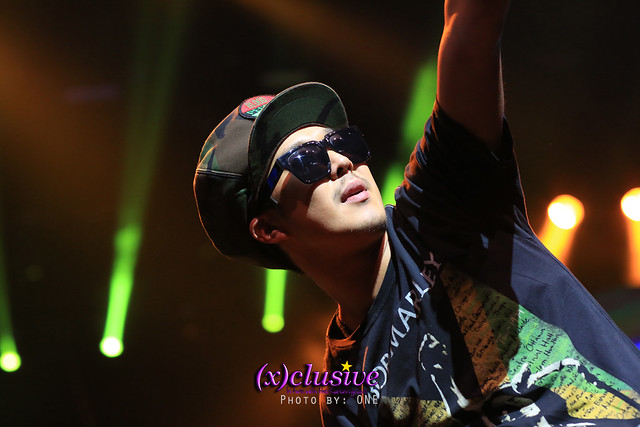 The individual stages continued with Kim Jong Kook’s “One Man” and his very own version of Maroon 5’s “Sunday Morning“. HAHA followed up with “Story of a Little Kid“, where a lucky fan joined him on stage. “Rosa“, another crowd-warmer, immediately turned the venue into HAHA’s personal mini concert. 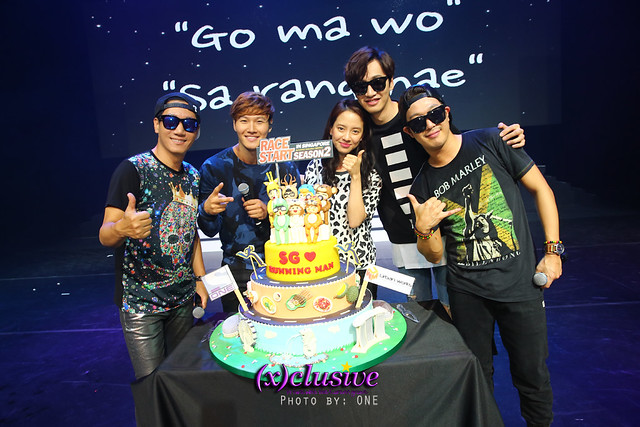 To show their love for the cast who put up such a great show, the fans specially prepared an event as well. As the lights dimmed, the audience flashed the lights from their handphones and started singing “Twinkle Twinkle Little Stars”. It was no doubt a sight to behold as the ‘starry sky’ sparkled in the darkness. At the end, fans collectively shouted “Gomawo, Saranghae” (T/N: Thank you, I love you). Ji Hyo was so touched by the event that she could be seen almost tearing, and the other members were taking turns to console her. A cake, with the figures of the Running Man cast and local delights, was pushed out and the cast were pleasantly surprised. 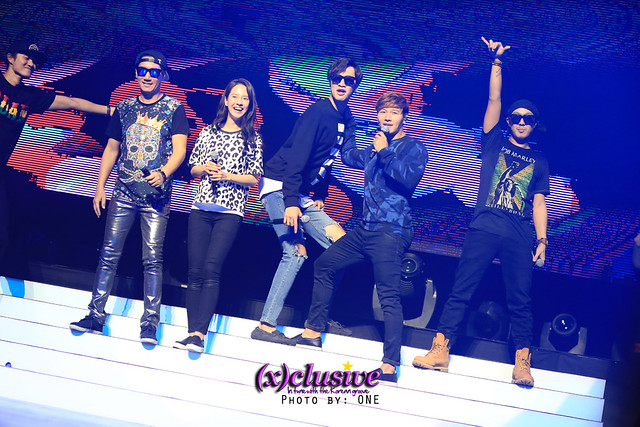 For the encore, all five members performed the cute song “Lovable” followed by the party track “Busan Vacance“, which brought the fanmeet to an all-time high. And when everyone thought that everything was over (since the cast went backstage), the fans were treated to a surprise when the cast came out for a second encore with 2PM’s “Hands Up“, when Kwang Soo ran down the stage to give Hi-Fives to the fans. After the song, to thank the fans for all the love rendered that evening, the cast gave a big bow. The biggest surprise came when the cast appeared for the third encore stage with “December”, where Kwang Soo, HAHA and Ji Hyo took fans’ handphones and took selfies with them. To wrap up the night, the cast members threw hearts to the audience, saying ‘I Love You’ and made a promise to be back again.

Once again, a big thank you to ONE for extending the event invite.

Loving the action and laughter in Running Man? New episodes of Running Man premiere on Fridays at 2345h first and exclusively on ONE. Repeats of Running Man air on the following Friday at 1940h, as well as on Saturdays and Sundays at 2315h.